The Fast and Slow of it all 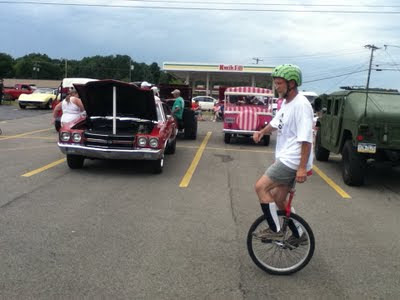 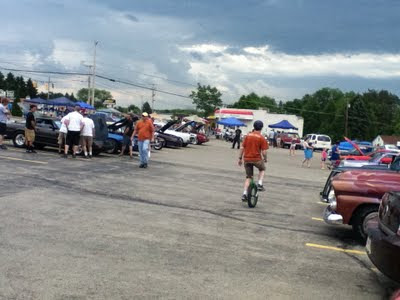 Rick has only been riding since last winter! He's be become quite the climber and uses his uni a lot.

Yes, we were allowed to ride around the car show! 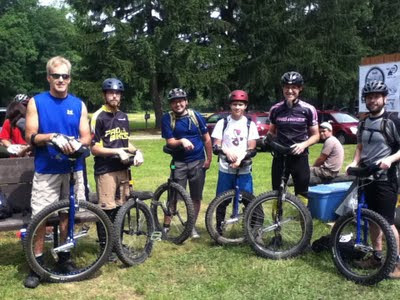 We had 6 in the Uni Class (an off road record for at least Western PA!). In the pic are: Claude, Isaac, Andy, Connor, Dave, and Buzz. 7.78 mi of good racing times. Look for a race writeup (including some uni info) in the Pittsburgh Post-Gazette this coming Saturday (the 25th). Thanks Shannon in advance for the article!

You might not recognize Claude, Connor, or Buzz. They aren't from around here. Claude made the trip from Germantown, MD; Connor from near Erie, PA; and Buzz from Rochester, NY. Good times.

An especially huge THANK YOU goes out to Michael and Mindy White for being the race organizers who were completely willing to not only accept, but embrace the concept of MUnis at the race. Now they just need to learn to ride a uni...

On the horizon: more goodness.

July 4th we'll be joining Chas from Pro Bikes for the Monroeville 4th of July Parade. Also joining us will be a bunch of kids on bikes. Human Power!

July 9th we'll be in Emlenton for a parade. The parade is at 6pm and Emlenton is a bit far to ride a uni to and make it home before dark so we'll carpool. Meet at Darn Yarn Needles and Thread (371 N Main St. in Butler) at 4:15 if you want in. We need to be there by 5pm. If you're meeting us in Emlenton, we'll be at the Post Office.

July 23-30th some of us will be at the annual North American Unicycling Convention and Championships in Madison, WI (this year). Lisa, Dave, and Isaac are competitors this year.
Posted by The Wobble at 11:31 AM